Future voters involved in General Election by forming their own parties and going to the polls. 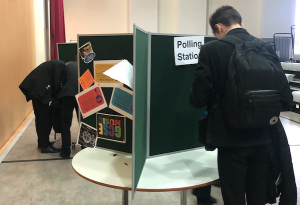 Future voters got involved in the General Election by forming their own parties and going to the polls.

A-LEVEL government and politics students at Epping St John’s Church of England School Sixth Form, in Epping, established a range of political parties to represent those making up the country’s Parliament, including the Foxes, Seals, Sloths, Cows and Woodpeckers.

They produced manifestoes and promoted their vows among their peers with posters and during assemblies.

Every student in the school then registered to vote – in the same way as adults do – and went to in-school polling booths to privately make their choice. They voted in the Seals – representing the Conservative Party.

BBC broadcaster Chris Mason recorded a personal message to students at Epping St John’s advising them to ensure they thoroughly read the manifestoes presented to them before voting.

Matt Yerosimou, government and politics lead, said: “We wanted this to work in the same way as it does in the real world. Students had to go out of their way to register their intention to vote.

“It has been a great opportunity to promote politics. The buzz around the school has been amazing.”

The school promotes a Word of the Week which took on a political focus with a Word of the Day for the three weeks leading up to the election.

Mr Yerosimou said: “Every day, in registration, students have been learning the definition of words they have been hearing in the news and politicising their language.

“We want them to be going home and talking about what they have seen and learnt in school on the topic. It has been about them getting involved; it has had nothing to do with adults, it has been about taking politics to young people, at a time when it is massively important.”