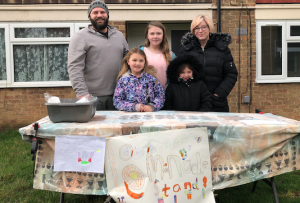 KIND-hearted Harlow schoolgirl Keira has raised well over a thousand pounds for victims of the Australian bushfires by holding a Lemonade stall on Sunday afternoon.

As YH reported on Saturday, Keira’s class at St James’ C of E school had been discussing the Australian bushfires and how they could help. When she returned to her Rundells home, Keira came up with the idea of hosting a Lemonade stall.

Her parents created a justgiving page which also included a hand-written letter from Kiera which she posted to all her neighbours. A YH reader (thanks Angela!) spotted this and told us about it. We published a story which hundreds of readers saw and duly made it their mission to head down to Keira’s Lemonade stall on Sunday afternoon.

Neighbours, dog-walkers, joggers, even two local councillors flocked to Kiera’s very busy stall. They all reported that the lemonade was great.

By Monday morning, the total had passed over £1400. An amazing feat.

At the end of the day, Keira just wanted to say thank you.

The link is below.