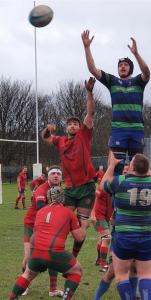 HARLOW’S first game after the Christmas break turned out to be a tricky affair.

In the first five minutes prop Ryan Clark found a gap and powered over the line from 10 metres to score Harlow’s first try.

King’s Cross Steelers made use off the wind and pinned Harlow back inside their 22 metre line. With their large heavy back controlling the play they fed the ball out to their winger who scored in the corner to make the score 5 – 7 after 10 minutes.

Harlow then struggled to get into any pattern of play being penalised by the referee for minor offences.

Against the windy conditions Harlow’s full back Jack Packmam Almond caught a difficult high ball in his own half. Quick thinking winger Dale Stalley looped around to collect the ball and went on one off his winding runs, deep into the Steelers half. Ten metres from the line Dale found himself looking for support and up popped Packman to take his pass and score Harlow’s second try.

Twenty minutes into the game the away side thought they now had control of the game with the score at 5 – 12. The K X Steeler’s had other ideas and from a driving maul from the line out pushed Harlow back over their line to close the gap to 10 – 12.

With James Clark being yellow carded for an off the ball tackle Harlow played the rest of the half with 14 men.

Harlow defended well and with a quick break from his own half Debut centre Joe Young found space popping the ball to Jack Hobbs. Jack sucked in the Steelers defence and passed to his supporting winger Scott Whitby scoring Harlow’s third try.

With Rick Hobb’s converting Harlow went in at half time with a 10 – 19 lead.

The second half saw Harlow struggle to capitalise on their first half lead. Both sides were giving away silly penalties, frustration crept in and with that their discipline.

An off the ball incident saw two Harlow players leave the field with yellow cards. With twenty minutes to play Harlow found themselves with only 13 players. KX Steelers took the opportunity and their heavy forwards battered Harlow’s defence on their five metre line . The Red Men’s defence held with scrum half Chay Clark shouting out the orders to plug any gaps in the defensive line.

To the Steeler’s surprise Harlow rode the storm for 10 minutes and came out protecting their 10 – 19 lead.

But just before the Harlow’s yellow cards were due to return to the field the centre Young found a gap bursting into the Steelers half .
Speedy Dale Stalley took the pass to run in Harlow’s fourth try to seal the victory and bonus point.

Next Saturday, 18th January, Harlow play Chelmsford in the top of the table clash. 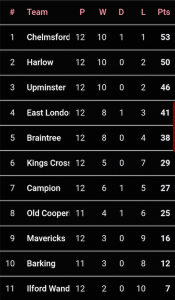