Roydon Primary pupils learn to walk like an Egyptian 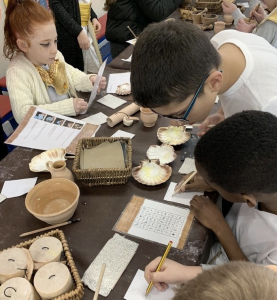 YEAR 3 pupils at Roydon Primary Academy, in Roydon, indulged into the life of an Egyptian as part of their latest history Wow day.

They re-enacted an ancient Egyptian banquet, tasting foods which would have been eaten at the time including bread, cheese, olives, grapes and figs.

The children, who spent the day using Egyptian names, also took on key roles from Egyptian society such as royalty, servants, soldiers and workers.

Headteacher Michael Clark said: “Year 3 were amazing.
“We try to allow the children to spend as much time as possible taking part in new experiences outside of the classroom to put their learning into context. By doing this at the end of the unit, the children could understand what they were being told.”