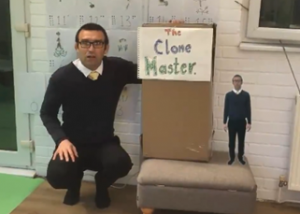 A TEACHER has cloned himself so each child in his class has their very own version of him to lead their home learning.

Enzo Vullo, Reception class teacher at Roydon Primary Academy in Harlow, has found exciting ways to capture the attention and imagination of his young pupils during the school shutdown.

Mr Vullo has recorded a series of videos showing him attempting to clone himself by using a ‘clone master’ machine he purchased from the internet.

The first video, released daily to the children in his class, explains that to solve the issue of them not having a teacher at home, he has decided to try and clone himself.

He told them, however, the first attempt failed as he was too small, the second failed as the clone was back to front, but the third attempt resulted in him being able to successfully clone himself in his garden shed.

The series of videos is posted alongside the daily interactive phonics, writing and maths lessons online he also creates, so pupils can follow his lively lessons from the safety of their own front rooms.

Mr Vullo said: “During the school closure, we have posted these funny videos to ensure the children continue to feel part of the class and look forward to what we will be posting next.”

Headteacher Michael Clark said: “Mr Vullo has used technology to inspire and has offered educational resources to his Reception class. He has created his own website for the children to access daily videos and activities.

“But, his use of technology does not stop there; he has also been creating a series of films to inspire and amaze the children, so they develop an enthusiasm for discovery. In his videos, he claims to have a clone machine so he can make 30 clones of himself which he will post to each pupil, so every child can have their own Mr Vullo.

“We, as a school community, are incredibly lucky to have Mr Vullo. His dedication to the children and both their academic progression and personal wellbeing is second to none.

“He is making a difficult time for children of such a young age so much easier.”

Follow the lessons at https://mrvullo742939249.wordpress.com/ and find the clone master videos on the school’s social media pages.