FOR three long months, Harlow athlete Grace Iyinbor has been unable to compete as an athlete. Last year, Grace, who now competes for Enfield and Haringey, made great strides in not only her favourite event (Javelin) where she came sixth in the Southern England Champs but also multi-events as well.

Grace is also a pupil at St Mark’s West Essex Catholic School and was supposed to be sitting her GCSEs. Covid-19 also put paid to that.

So when her coach, John Waugh, told Grace all about a charity Javelin competition, she was determined to pick up her spear. 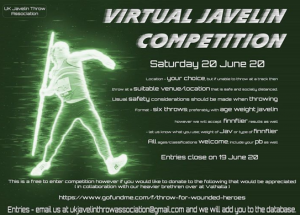 Finding a location was tricky but they were helped by Harlow Rugby Club who gave Grace the run of the top fields.

It was a great boost for Grace, supported by her mother, Monica, to get out and put a series of throws together.

Her six throws are below.