Letter to Editor: Austerity is deadly and it is a political choice 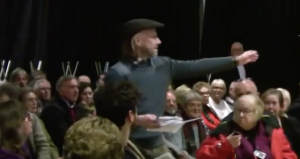 On the way to the hospital you may pass a school underfunded because of austerity, in which there may be pupils whose parents visit the local foodbank because of austerity. You may also catch a glimpse of the tallest building in Harlow, Terminus House, in which families from London have been forced to live in sub-standard overcrowded accommodation because of the “social cleansing” caused by austerity.

Austerity is deadly. A study published in the online journal BMJ Open in 2017 estimated that cuts in public expenditure led to around 120,000 excess deaths between 2010 and 2017.

Women living in the most deprived areas of the UK are now expected to live for 78.7 years, versus 86.2 years in the least deprived, a whole 7.5 years less. Furthermore, the average life expectancy for women in the UK, at 83.1 years, is one of the lowest among comparable countries, more than three years behind Spain. (The Health Foundation).

There was a statistically significant reduction in life expectancy at birth of almost 100 days among females living in the most deprived areas of England between 2012-2014 and 2015-2017, in contrast to an increase of 84 days in the richest areas. (Office for National Statistics 27 March 2019)

Austerity was a political choice. There is no reason why Britain cannot have the levels of public services seen in countries such as Sweden, Germany, or France.

The people of Harlow need an immediate end to austerity. We need the renewal of our crumbling infrastructure. We desperately need the reversal of a decade of Conservative cuts in government spending on health, education, and social security.

There is only one party standing in Harlow in this election that is committed to ending austerity and beginning the reconstruction of our damaged society: the Labour Party. For the sake of our town, for the sake of our society, we need to replace Conservative Robert Halfon with Labour’s Laura McAlpine as the Member of Parliament for Harlow.

11 Responses to "Letter to Editor: Austerity is deadly and it is a political choice"